FINDLAY, OHIO — A Fortune 25 company headquarters right on Main Street, a cluster of foreign manufacturers,a booming restaurant industry, and a new research and development center staffed with scientists and engineers from around the world.

Those are not things you’d expect to find in a city of 41,000 people, especially one surrounded by corn and bean fields.

But Findlay has all that and more, and it is playing an outsized — and growing — role in northwest Ohio’s economy.

The county’s unemployment rate last year averaged 4.4 percent, which tied for fifth-lowest in the state. Average earnings in Hancock County were $56,500, ninth-highest in the state, and in spite of a population that ranks 35th in Ohio, the county’s gross regional product was $4.38 billion, according to data provided by the Regional Growth Partnership.

Findlay and Hancock County are coming off a year in which a number of companies announced or completed significant development projects that will add hundreds of jobs.

McLane Co. Inc., a Texas grocery supplier, announced it would spend $119 million on a distribution center. Marathon Petroleum Corp., which last year was No. 25 on the Fortune 500 list, embarked on an $80 million expansion of its downtown headquarters. Cooper Tire & Rubber Co. moved ahead with a $40 million project to build a global technology center next to its headquarters.

Based on those investments and others, Site Selection magazine named Findlay as the most active small city in the United States for development projects last year. The magazine counted 20 new or expanded corporate facilities that involved an investment of at least $1 million, added at least 20 jobs, or created 20,000 square feet of new corporate space.

Site Selection’s tally doesn’t include retail or service-industry projects, such as the $12 million Hilton Garden Inn that opened near I-75 last year.

What is Findlay’s secret? Is it politics? Is it location? Is it luck?

And if you’re talking people, many who live in Findlay or keep track of what’s going on there would put Tony Iriti’s name high on that list.

“You have a really proactive economic development department led by Mr. Iriti, who knows the ins and outs of every aspect of how that region works,” said Adam Bruns, the managing editor of Site Selection magazine.

A former county auditor who also has served as mayor and led a private coalition that sought long-term solutions to problems caused by the flood-prone Blanchard River, Mr. Iriti’s approach to economic development is about building relationships and going well beyond looking for financial incentives. 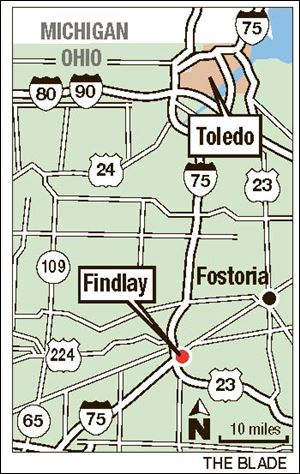 For example, when Dow Chemical Co. executives decided to close a plastic-film plant in Findlay, local plant management immediately called the alliance to explain the decision and let them know that Dow would be looking to sell the business.

It turned out a company from Brazil called Valfilm was interested. At the time, though, Valfilm didn’t have any U.S. operations. Mr. Iriti said the alliance helped them find accounting and law firms that had someone who spoke Portuguese to help shepherd a deal.

He also noted that years ago as Findlay began attracting Japanese auto parts suppliers who brought in executives and their families, the local hospital had forms translated to Japanese. The city schools also have people who teach English as a second language.

“We think we are an international community and we do the best we can to welcome everyone,” Mr. Iriti said. “That’s what we think is one of our strong points.”

And that Dow plant? It shut down for one day, then reopened as a Valfilm plant with the same 50-some employees.

Mr. Bruns of Site Selection said many successful small cities do well because they’re able to draw spillover activity from nearby metropolitan economies.

“To a certain extent that may be true in Findlay, although I think the propulsive force of Marathon is the biggest impact. Not just as a corporate end user unto themselves, but as a real anchor of the community,” he said.

The fact that Findlay has a Fortune 25 company to call its own is an unusual good fortune that has helped to drive a good deal of economic prosperity.

A living relic of the area’s late-1800s dominance as an oil producer, Marathon employs about 2,000 people in Findlay. Revenues were nearly $98 billion last year.

Marathon, which has been in Findlay since 1905, also generously supports the community. For example, the company is the leading donor for a new performing arts center that’s being built around a 1940s-era school auditorium.

Twenty-five other Fortune 25 companies are headquartered in small towns, but most are part of sprawling metro areas. With a county population of just 75,000 people, Hancock is easily the most rural of those areas. The next-smallest county to house the headquarters for a top 25 firm is Benton County, Arkansas, home to Wal-mart.

“It’s really an anomaly. I think a lot of it has to do with the fact that we have a very good corporate airport,” Mr. Iriti said. “Typically, companies like to locate near a big metropolitan airport, but in this case we’ve got a great municipal airport.” 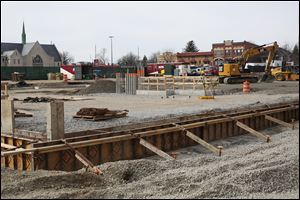 Cooper is another important longtime corporate resident of Findlay. It further solidified that last year with its new Global Technology center, a research and development facility that eventually will employ 40 highly educated researchers.

Cooper had regional tech centers worldwide, but the company wanted to have one main office leading the research. Charles Yurkovich, vice president of global research and development, said Cooper looked at a number of places, including China.

That would have cost less, but officials still chose Findlay.

“It just made a lot of sense when we looked at the whole package to do it here. Even though it wasn’t the lowest cost option, it appeared to be the best option for us,” he said.

Cooper was helped by the Findlay Hancock County Alliance, which helped secure an Ohio Third Frontier grant for the project. Mr. Yurkovich has nothing but good things to say about Findlay’s economic development group.

“They’ve been extremely good to work with, and they’ve been real proponents of expanding industry in this area and throughout Ohio” he said.

Continued investment from its large corporate companies helps keep Findlay’s economy going. Findlay’s site on I-75 and its connection to agriculture help too.

But perhaps more than anything, Findlay is boosted by its reputation as a place where enterprise can be successful

“Business just trusts that we’re going to be able to protect their investment. I think that trust is what ends up spending the dollars,” said Findlay Mayor Lydia Mihalik.

Ms. Mihalik said one of the city’s best tools for development is its designation as a Community Reinvestment Area, which allows businesses to hold taxable property values at their pre-development level for up to 10 years.

In return, companies can put that savings back into their business or help pay for necessary infrastructure.

For example, McLane, which plans to hire up to 425 people once its distribution center is finished next year, gave the city money to build road, sewer, and water infrastructure, along with $100,000 to put toward work force development.

“The community reinvestment area and the adjustments we’ve made to the CRA is probably the best attempt at incentivizing development that the city of Findlay has done in a very long time,” Ms. Mihalik said.

Another effort of the Findlay community has been to embrace a live-work-play message that goes beyond the dream of a quiet half-acre lot and a white picket fence that many big cities are pitching to help attract younger workers as the Baby Boomers retire.

Economic development officials and executives say the message seems to be getting through.

While deciding whether to put its tech center in Findlay, Mr. Yurkovich said Cooper executives discussed whether they’d be able to convince the people they wanted to move to Findlay. That ended up not being an issue.

“We’re in an area where it’s very easy to get to big cities with extensive sports and entertainment, but this is a community that is very modern that has everything you need from an educational standpoint, a medial standpoint, and it’s a great place to live,” he said.

The recognition from Site Selection is just the latest outside confirmation that Findlay and Hancock County seem to be doing things right from an economic standpoint, and officials say it will only raise Findlay’s profile.

Over the course of the day that the award was announced, the Findlay Hancock County Alliance’s economic development website got 3,000 hits — a comparatively enormous amount — from 19 countries and 48 states.

“This has been a consistent long-term effort, and I think it’s just finally gaining more notice that this is happening,” said Frank Guglielmi, a retired bank executive and Findlay businessman.

“This is not an overnight situation,” he said.